December 1995 (Super Nintendo)
April 26, 1996 (Sega Genesis)
May 1996 (Game Boy)
October 31, 1996 (Microsoft Windows)
Toy Story: The Video Game (also known as simply Toy Story) is a video game based on the Pixar movie Toy Story. The game was first released on December 1995 for the Super Nintendo Entertainment System in the US, with the Sega Genesis version being released in April 1996. A Game Boy and PC version was also released.

Each version was different from the other, either in the number of levels, graphical differences, or music and sound.

The game remains thematically true to the movie. Woody, a pull-string cowboy doll, is a little boy's favorite toy until he gets an electronic talking Buzz Lightyear with arm-mounted laser and karate-chop action for his birthday. Under the bed goes Woody and so starts a rivalry between the loyal cowboy and his egotistical, somewhat delusional nemesis that lasts the whole movie and the whole game. Each level, with the exception of the Buzz Nightmare level (which is based on a deleted scene), depicts a scene from the movie.

The player controls main character Woody through 18 unique levels (17 in SNES and Windows version, and 10 in the Game Boy). The style of levels differ throughout the game. Apart from typical platforming levels, there are two levels (A Buzz Clip and Light My Fire) where the player has to control RC from an aerial view, and he has to make it to the end of the level before his batteries deplete, but he can collect power cells to restore his energy. There's also another RC level (Day-Toy-Na) that takes place in a 3D environment. Another 3D-like level (Really Inside the Claw Machine, in the style of another game, Doom) involves Woody traveling through the vents of a claw machine rescuing Squeeze Toy Aliens, ultimately before time runs out.  Woody's main weapon of the game is his pull string, which he can use it to tie up enemies, hit things, as well as swing across gaps with hooks.

Items in the Game

While exploring the breathtaking levels of the game, there were also special items for Woody to obtain or help him in the game, these were as follows:

It was first released on December 1995 for the Super Nintendo Entertainment System, April 1996 for the Sega Mega Drive/Sega Genesis, May 1996 Game Boy, and October 31, 1996 for the PC in the US. It was advertised in a couple Toy Story TV spots, and even got its own advertisements on the VHS's for Toy Story and The Big Green (both used the Sega Genesis versions for gameplay footage).

Characters in the Game

1 2 Only appears in the Genesis version 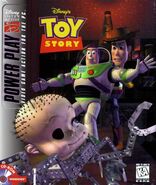 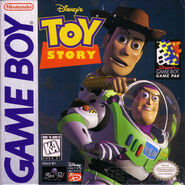