The player controls Buzz Lightyear as he tries to locate and rescue Woody after he is kidnapped by Al McWhiggin. He can execute a jump and a double jump, as well as two attacks: his wrist laser and his spin attack, both of which can be charged. In addition, there are 5 power-ups that can be unlocked to help Buzz complete certain tasks. Most of the voice cast from the film returned to voice their characters in the game with the exception of Wallace Shawn, who did not reprise his role as Rex (being voiced instead by Earl Boen).

There are fifteen levels in the game. The levels are grouped into five zones (3 levels per zone). Only the first level is available at first, but the player can unlock more levels by collecting Pizza Planet tokens. Each level starts with an FMV scene taken from the movie (except from the Nintendo 64 version--its low-capacity cartridge system meant that these movies were replaced with comic-strip type "cutscenes"). In each level, there are five Pizza Planet tokens that the player must collect. The player must collect at least one token to unlock the subsequent level.

In the first level of every zone, Mr. Potato Head is missing a body part that the player has to retrieve in order to unlock a specific power-up. Some Pizza Planet tokens can only be collected with the use of a power-up, while others are merely easier to collect with the use of a power-up. Returning to previous levels is required to obtain Pizza Planet tokens that couldn't be retrieved earlier without a certain power-up.

In the last level of every zone, the player has to fight a boss to proceed to the next level. A certain number of tokens is required in order to access these "boss levels." When the player completes a boss level, a bonus movie will be unlocked, which can be viewed at any time. In the last boss level, the player will face three mini-bosses from previous levels all at once: The Prospector (Airport Infiltration), The Gunslinger (Al's Penthouse) and The Blacksmith (Tarmac Trouble).

There are 15 levels in the game:

Differences Between The Versions

There are many differences of each console version of the game. This includes the soundtracks being slightly different (i.e. Andy's house has its own audio track in the Dreamcast, Playstation, and PC versions). A lot of the music sounded quite different from its N64 counterpart as they had more variations of instruments. The PS1 cutscenes had different audio (not counting dialog), the Dreamcast does too, the reason why is because the Dreamcast and PC versions were the final versions of the game. Another thing is that the Dreamcast has correct shading, this is due to it being the final version, plus the Dreamcast was a sixth-generation console. Woody and Jessie do not have any audio in the N64 version of the Prospector Showdown boss, this may be due to the fact the cartridges were low on memory capacity. On most versions, each level starts with a FMV scene taken from the movie, except from the Nintendo 64 version—its low-capacity cartridge system meant that these movies were replaced with comic-strip type 'cutscenes'.

The European versions of Toy Story 2 has replaced the black haired mustached bandits with the blonde haired cowboys.

In the PC version of Toy Story 2, a boss battle on level 12 featuring Emperor Zurg has a speed glitch on some of the modern Windows versions including Windows XP, 7.

The speed glitch has caused Emperor Zurg to continuously evade Buzz Lightyear from ever touching him rendering the game nearly impossible to beat.

However, you can still beat Emperor Zurg, the way to do this is by getting him cornered and trapped between 2 wall corners. Once you get him cornered, charge up your spin attack, release the spin attack, quickly jump forward and pull back, otherwise your fall down, repeat this until he gets defeated.

This Speed Glitch only happens in the PC version and does not happen in the Playstation 1, Nintendo 64 or Dreamcast version. 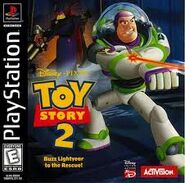 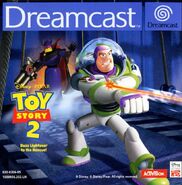 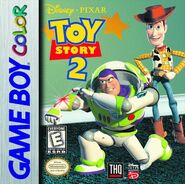 Game Boy Color version.
Add a photo to this gallery

Andy's Neighborhood seen from the tree.

Andy's House seen on the level select screen.
Add a photo to this gallery
Retrieved from "https://pixar.fandom.com/wiki/Toy_Story_2:_The_Video_Game?oldid=160981"
Community content is available under CC-BY-SA unless otherwise noted.