Woody, Jessie, and Buzz are playable characters in this game, and each has a special ability. Woody can use his pull string to swing across some areas. Buzz can throw characters across long distances, and Jessie is the most agile and can land on certain small spaces. Some levels require the players to switch between characters during the level in order to clear it. Story mode consists of several levels and follows the events of the story.

Toy Box mode is an open-world collection of gameplay opportunities where the player runs around and completes missions, plays minigames, or just meanders around and creates their own fun. Every mission once successfully complete awards a certain amount of gold. Players then use the gold to buy new buildings and building customizations and clothing for the inhabitants of the town, such as a haunted house that releases ghosts upon the world that must then be taken care of, or a bearded farmer whose lost cows the player has to rescue. The buildings can be customized and placed wherever the player wants, giving the town a personal touch, even down to the type of people who live in the town.

An exclusive version of the game for Xbox 360, Wii, and PS3 was sold at Walmart that included four additional Theme Packs for Toy Box Mode. The Theme Packs included Sports, Knights, Cutesy, and Military. Players can use the Theme Packs to decorate buildings and dress townspeople and aliens in different ways after spending 500 coins on each pack in the Al's Toy Barn area of the game. The Walmart exclusive version also features a reflective foil background on the front of the case, rather than the standard black.

Differences from the film

Exclusive Features for the PS3

You can play as Zurg and he has his own unique missions. He is also able to drive around in his custom vehicle. There were also some downloadable minigames released in fall 2010 for the PlayStation version.

Woody about to shoot an Outlaw with a UFO Gun in Toy Box Mode.

A player doing stunts in the Stunt Park which features Buttercup as the announcer. 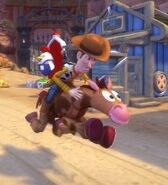 Jessie spotted by Bad Buzz in the Prison Break level. 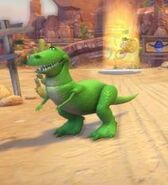 Rex as he appears in Toy Story 3: The Video Game.

Stinky Pete as he appears in Toy Story 3: The Video Game. 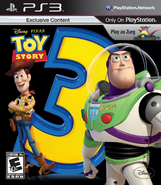 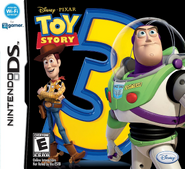