Cameos, in-jokes, re-used animation ,and other trivia from Toy Story 3.

Buzz's batteries are BnL from WALL•E. 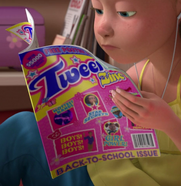 A note on Andy's bulletin board showing the names of Carl and Fred from Up.

A better view of the letter.

Mr. Ray from Finding Nemo appears at The Daycare.

On the train is the number 95. 95 is a reference to Lightning McQueen's number and when the first Toy Story was released, 1995. 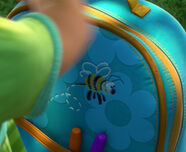 Wally B. from the 1984 short The Adventures of Andre and Wally B. on Bonnie's backpack.

The toys from Tin Toy.

Atta's name is on the wall.

Finn from Cars 2 appears on a poster.

A toy tractor similar to the Tractors from Cars appears behind Buzz and Sparks.

A miniature toy car of Lightning McQueen appears behind the girl that is similar to Boo from Monsters, Inc..

A car on a poster similar to Boost from Cars in Toy Story 3.

The Luxo Ball above Chatter Telephone.

Revolting, a sponsor from Cars.

A truck similar to Red, the fire truck from Cars.

A "Newt Xing" sign makes a nod to newt.

Mater sticker in Andy's toy chest (in the red circle).
Add a photo to this gallery

Retrieved from "https://pixar.fandom.com/wiki/Toy_Story_3_Trivia?oldid=231015"
Community content is available under CC-BY-SA unless otherwise noted.