"OK, here's what you do. You just sneak up in front of 'em, and then honk. And they do the rest. Watch this!"
—Mater teaching Lightning how to play tractor tipping

The Tractors are supporting characters in Cars and Cars 3. They are pink four-cylinder, diesel-powered Axel Chompers. They plow through the day and sleep in the fields at night. They are certainly not the brightest vehicles, as they fall on their backs and make a curious sound when they have been startled.

"The earliest domestication of the North American tractors can be traced back to the 1800s during the construction of the first transcontinental railroad. Railroaders quickly discovered the tractors' ability to create level grades across even the most demanding geography. Today the native plains tractor is regarded as one of the true pioneers of the West."[3]

"Tractors are hard workers. They enjoy what they do, plowing through the fields on a nice warm day, and then falling asleep under the moonlight. But every so often they wake up to the sound of snorting and giggling trailing off into the distance, and they find themselves lying on their backs staring up at the stars. But they don't mind. It's actually kind of nice to get to sleep lying down for a change."[3]

They appear in Cars when Mater decides to take Lightning McQueen tractor tipping. Mater shows Lightning how by sneaking up to a tractor and honking his horn, causing the tractor to wake up and tip over, before venting its exhaust. Lightning, lacking a horn, uses his revving engine, startling all of them.

They later appear in Lightning's dream of Frank winning the Piston Cup.

The same day, Mater accidentally provokes a stampede of tractors to chase him into Radiator Springs. Mater eventually manages to chase them away by cracking his tow cable like a whip.

All the tractors, including Frank, show up during the credits, watching the films screened at the Radiator Springs Drive-In Theatre.

In Mater and the Ghostlight, Mater zoomed past some tractors in Frank's field when he thought he was being chased by the Ghostlight. Mater's screaming causes them to tip.

The tractors appear in Unidentified Flying Mater, where Mater takes Mator tractor tipping. Mater tips a tractor with his horn, then Mator tips all of the other tractors in the field with a louder honk that created a crop circle design.

In DisneyToon Studios' Planes, some tractors appear on the fields during Dusty's training montage. When Ishani is later talking to Dusty in India, a tractor passes them. During their journey to the Taj Mahal, they fly over a few fields full of tractors.

In The Radiator Springs 500½, some tractors appear on a part of the racetrack where it splits into two canyons. Mater tells Lightning, Sandy Dunes, Shifty Sidewinder, Blue Grit and Idle Threat to go left there, but they instead went right after getting confused with Mater saying that going left is right when he meant that going left is correct. One of the tractors tips as the racers drive past them.

The tractors make a cameo in the film, when a couple of them, including a little one, cross the road to Propwash Junction to meet up with the other tractors in a field. As they cross the road, they get checked by Chug and Sparky so that Dusty can use the road to leave for Piston Peak National Park.

The tractors appear in Cars 3, where McQueen and Cruz train with them for the final race. During Cruz's turn on the track, she also imagines the other racers as tractors to help her get past them.

In Cars: The Video Game, they only appear in Tractor Tipping. The goal is to tip all the tractors before time runs out, and try to avoid getting caught by Frank or the lamps.

In Cars: Radiator Springs Adventures, they appear in the game Tractor Roundup. The goal is to tip all the tractors or they will get loose and drive all over town.

In Cars Mater-National Championship, they appear in the Tractor Tipping minigame. The goal is to tip all the tractors before time runs out like in the original game, and try to avoid getting caught by Frank or the lamps.

In Cars Race-O-Rama, they appear in a minigame called Tractor Stampede. There are tractors stampeding all over Radiator Springs. The goal is to tip all 10 before time runs out, and there is no Frank to watch out for.

Tractors also appear in Cars 2: The Video Game along with Frank. You can earn the "Tractor Tipping" badge if you tip 3 tractors in any place you can find them.

Although they don't appear in Kinect Rush: A Disney Pixar Adventure, their mooing can be heard at one point in the first Cars level Fancy Drivin' when the player drives through a field with Mater and Sheriff.

The tractors appear in a field next to Propwash Junction's runway in Planes: The Video Game owned by a farmer named Pete. In the Blown out of Proportions level, Dusty has to rescue the tractors and take them back to their field with a magnet after they get scattered during a tornado storm.

Some tractors appear in a field next to Radiator Springs in the Cars Play Set in Disney Infinity. One of the tourists have a mission for the player to bring back three tractors to the barn after they got scared by an engine rev and ran away. One of the missions given by Finn McMissile is to tip a few of the tractors. 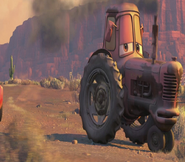 A tractor in Cars 2: The Video Game.

A tractor seen in Disney Infinity 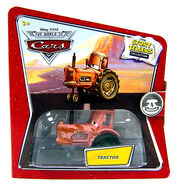