Troll Doll (or simply Troll) is one of Molly's toys. She is a Troll doll with abnormally large, pink hair wearing a blue bikini with oxeye daisies. She is good friends with Bo Peep and Rocky Gibraltar.

In Toy Story, Troll is first seen standing while Mr. Potato Head (portayed as One-Eyed Bart by Andy) is stealing money. When Buzz Lightyear comes, she is psyched with some other characters when Buzz Lightyear "flies." A little bit later, Troll gets her hair combed by Buzz Lightyear, making Woody more jealous. After that, she is seen with Rocky Gibraltar, Snake, and Rex watching them lifting weights. One night, when Woody accidentally knocked Buzz out the window, many of the toys accuse him of doing it on purpose to get rid of him. It is possible that Troll was one of the few toys that did not accuse him of doing it intentionally. However, it is hinted that she soon lost her trust in Woody after seeing him holding Buzz's severed arm at Sid's house during the middle of the film. Troll appears at the end of the film in Andy's new room engaging in the Christmas festivities with the rest of Andy's toys hearing what presents Andy receives for Christmas from the Green Army Men.

In Toy Story 2, Troll is with Bo Peep nodding that Woody's hat is not in Molly's room. She is later seen alerted that Woody saying that there is a yard sale. In the end, she is with all of the other characters having fun when Wheezy is singing "You've Got a Friend in Me."

Jessie: "Oh, no!"
Woody: "The orphans!"
—Jessie and Woody, after Mr. Potato Head (portrayed as One-Eyed Bart), blows up a railroad bridge

In Toy Story 3, Troll was used in one of Andy's games where she was portrayed as a group of about a dozen orphans on a train. Troll was likely either sold in a yard sale, thrown away or donated between Toy Story 2 and Toy Story 3. However, Troll has a cameo in Andy's home videos, when Andy's mom told Andy to say Happy Birthday to Molly, and when he was watching a "scary movie". Later, smaller troll dolls are seen at Sunnyside Daycare when Andy's toys arrive.

In Buzz Lightyear of Star Command: The Adventure Begins, Troll appears briefly to watch the movie with the rest of the toys. 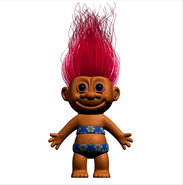 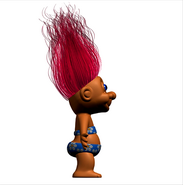 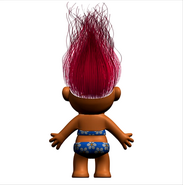 Troll in the opening scene of Toy Story

Troll dolls being portrayed as orphans in Toy Story 3 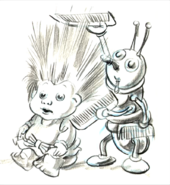 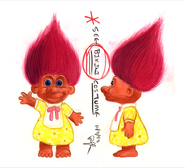