Tubbs Pacer is an antagonist in Cars 2.

"Tubbs never set out to lead a crime family, it just worked out that way. As a Pacer in the car world, you don't get much respect on your looks, so you have to earn it. That's why he embraced his negative nickname, Upside-down Bathtub, and dubbed himself Tubbs. Before long, he was running with a pack of other disrespected Pacers who were also tired of being called jelly beans and junkers. They met up with Professor Z and a whole new bushel of Lemons looking for the same car-world credibility. Tubbs proved his loyalty to this new family over and over, and he soon found himself poised to help take over the world."[1]

Tubbs is a gold and brownish Pacer who works with Professor Z. He is head of the Pacer family. During the film, Tubbs and the the other main heads of the three lemon families (Gremlin, Trunkov, Hugo) attend a meeting with Professor Z in Porto Corsa to discuss their evil plans about discrediting the Allinol by using the radiation disguised camera to crash out the racers in the World Grand Prix that use the gas, and ensure that all cars keep using conventional fuel to secure the profits of their "lemon" organization who managed to secure the largest unexplored oil resources in the world. Tubbs is seen smiling at the idea and can't wait to become extremely rich when cars start buying oil from the lemons.

Near the end of the film, Tubbs gets spray painted by Ramone. He tries to escape with the remaining lemons, but is arrested by Sarge and the army in London. 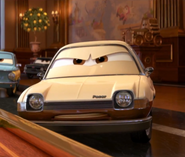 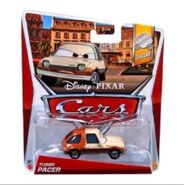 J. Curby Gremlin: "The Professor's on the run!"
Tubbs Pacer: "Someone's got to get McQueen."
Vladimir Trunkov: "Ah! Get McQueen!"
—The lemonheads, after Professor Z runs away.

"Retreat!"
—Tubbs Pacer orders the other lemons to run away.

Retrieved from "https://pixar.fandom.com/wiki/Tubbs_Pacer?oldid=217436"
Community content is available under CC-BY-SA unless otherwise noted.