Fillmore: "Hey, Luigi. Which way to the hotel, man?"
Luigi: "What? No friend of mine will stay in a hotel in-a my village. You will stay with my...
Uncle Topolino-o-o-o!"
—Luigi introduces Uncle Topolino to his friends.

Uncle Topolino is a character in Cars 2.

In the small village of Carsoli, near Porto Corsa, Italy, Luigi's favorite uncle, Uncle Topolino, resides with his beloved wife, Mama Topolino. Uncle Topolino is a 1937 Fiat 500 "Topolino" and the owner of the village's tire shop, Topolino's Tires, where he taught Luigi and Guido everything they know, though Uncle Topolino is full of sage advice about more than just tires.[1]

In the movie, Luigi and Guido lead the rest of Team Lightning McQueen to their home village to stay with the Topolinos while the World Grand Prix is in Porto Corsa for its Italian portion. During the welcome party, Topolino says that he can tell why McQueen is sad, but then adds that Luigi told him. McQueen tells Topolino his problem of being mean to Mater and Mater leaving. He gives McQueen some wise words of wisdom. He tells him that Luigi and Guido used to always fight, but they always quickly resolved their issues and made up, as friendship is more important than any fight. After strolling off with Mama Topolino, he is not seen for the rest of the movie.

Topolino is kind and nice, and loves to help out. This is parodied in the trailer "V12 TV" when he takes the name of "Dr. Fill it Up", a parody of Dr. Phil. 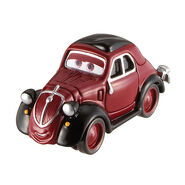 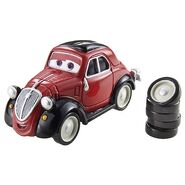 Retrieved from "https://pixar.fandom.com/wiki/Uncle_Topolino?oldid=214867"
Community content is available under CC-BY-SA unless otherwise noted.