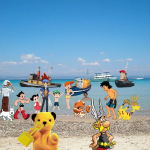 Hello, jenkins92 here, giving you my knowledge for various wikias. I will mainly be based at Thomas & Friends Wikia, but I will visit other wikias at anytime. I am a fan of many different phenomenons and amongst other things, I have been following the feature films of Pixar Studios in San Francisco, the first animation company to make full CGI movies. Every time a new Pixar movie comes out in the cinemas, I always try to make sure I see it no matter what.

Toy Story: The first ever movie to be made in full CGI. At the age of 4, this new technique was very overwhelming to start with; I could not tell whether it was live action, drawn or model animation, my reaction at that point pretty much like the general reaction to the moving pictures when they were first shown on the projection screen. However as time went on, computer animation became a more interesting medium and Toy Story soon became one of my favourite films.

A Bugs Life: After Toy Story had given Pixar its sudden recognition, I was very interested to  see its makers try again. Needless to say, this film was in stiff competition with another insect based film from Dreamworks which I had seen sooner. But although Antz was a very funny film and I have not much to say against it, in my personal opinion, A Bugs Life had the stronger story line. Both Antz and A Bugs Life had some excellent humour, but for Antz, the humour mostly lay in the conversation of the dialogue, while A Bugs Life contained an equal amount of humour in both the dialogue and the acting, even without the outtakes which have me laughing every time.

Toy Story 2: Sequels are always inclined to be made better than the first and to me, the improvements the production team had been hoping to make had indeed been reached. The first film lacked a few elements to make the franchise child friendly and yet make it suitable for all the family; these elements were definitely added into this film. Despite Toy Story’s worldwide success, critics complained that the animation of the humans was not life like. Looking at it now, I can see what they meant and I think the technical team really made the humans look more genuine in Toy Story 2. Well done, boys. What other film would have Joe Ranft regenerate into Robert Goulet and what other film would see Andi Peters turn from a children’s presenter to the Number 1 Baggage Handler at the last minute.

Monsters Inc.:Pixar’s first change in direction. Pete Docter cleared up the puzzles that we as children had lingering in our minds. What was the monster for these monsters living behind our cupboard doors? Why were they said to jump out on us at night and scare us. Thanks to Mr. Docter, the answer became simple; it was nothing personal, it was just their job. What a lark, well done, Peter.

Pages created by me:

Retrieved from "https://pixar.fandom.com/wiki/User:Jenkins92?oldid=207051"
Community content is available under CC-BY-SA unless otherwise noted.