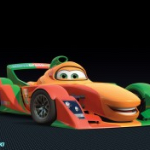 Hi, welcome to Pixar Wiki! Thanks for your edit to the A Bug's Life Trivia page.

I see you are creating new character pages for some lemons in Cars 2. Where is the reference your getting these names from? Have a reference of some kind before creating those characters. Otherwise I'm putting them for candidates for deletion, because anyone can make up names. Which I have a feeling your doing. Unless you show a reference. thanks Endrizzi427 23:24, August 25, 2011 (UTC)

where did Lee confirm this? Please provide some sort of source, I haven't heard or seen this, and was unable to find any mention of this doing a google search. Thanks! --Jeff (talk) 15:23, September 10, 2011 (UTC)

Hello, you had created a page for your hopes for Cars 3. Unfortunately, we cannot have main pages for that kind of things, so the page was deleted. However, I have made a backup copy, in case you hadn't any other copy. So here it is, right after this message, in its integrity... Gray Catbird 20:45, September 15, 2011 (UTC)

Lightning McQueen (Owen Wilson) is racing in the New and Improved World Grand Prix. In the first race, in Germany, Francesco Bernoulli (John Turturro) beats Lightning because he spun out. The second race, in Italy, Francesco crashes and so does Carla Veloso (Jossara Jinaro). Lightning gets captured by the lemons.

Back in Radiator Springs, Finn McMissile,(Michael Caine) and Holley Shiftwell (Emily Mortimer) are staying beacuse they found out Rod "Torque" Redline (Bruce Campbell) was still alive. They get a phone-call from Fillmore (Lloyd Sherr) to come and help. Emma Trunkov (Heidi Klum) the 2nd leader of the Trunkovs, said to McQueen that he could only race if he ran on Allinol in the last race. So he agreed. Grem, (Joe Mantegna) and Acer, (Peter Jacobson) captured Mater, Finn, and Holley, but not Torque because they didn't know he was still alive. Finn told them that, so they went to capture him.

After the race began, Rip Clutchgoneski (Jean Claude Van Damme) spun out, so he was disqualified. Lightning was going to be blown up, but Fillmore replaced the Allinol with his own fuel when he took a pit stop. Grem was confused, so he shot the pits which locked his team in. Lightning did not win. He gave up.

Mater escaped, and so did Finn and Holley. They followed McQueen. Then the lemons came and surrounded them all. Torque defeated them all. Holley chased Emma to the river, and she fell in. Holley saved her, then locked her up. When they got back to Radiator Springs, they found out that Professor Z (Thomas Kretschmann) and Miles Axlerod (Eddie Izzard) worked for Chick Hicks (Michael Keaton) and were taking over Radiator Springs. It hints to another sequel.

Emma Trunkov is the main antagonist. Lightning McQueen is the main protagonist. Finn is the deutragonist. Mater is the tritagonist.

Hi. You may have noticed that many of your edits are being un-done. This is because they are usually not factual but just opinions or are incorrect. This is requiring us to spend a lot of time correcting your edits. I need you to slow down the number of edits, make sure the change is correct and is not just an opinion but a fact. You will not get another chance - similar type of edits will cause you to be blocked from the wiki. If you want to express an opinion it should go on your home or talk page, or in a blog posting. If you have questions on whether an edit you'd like to make is appropriate, please ask myself or one of the other sys admins. Thanks. --Jeff (talk) 18:42, September 20, 2011 (UTC)

Dude guess what.I'm only a month older than you!

We have blocked you permanently. You continue to make similar edits that have been rolled back. You have been warned before so you are out of chances. Sorry that this had to be done but it was taking too much of our time to clean up after you. --Jeff (talk) 16:31, September 24, 2011 (UTC0

PLEASE, one more chance! I didn't know they were already deleted! Ithought you needed them! I promise to give only sourceful evidence! PLEASE! Funnyboy2963 18:42, September 24, 2011 (UTC)

Do not create a new user. The system notes the internet address you are coming from, so creating a new user will not work. Even if you are successful in creating a new user, that violates Wikia policy and will cause the new account to be blocked.
The issue is that content is being added that is not factual, or photos are being added incorrectly, pages are being recreated after being deleted, un-needed categories are being added, or are being added without proper sorting, etc. We are very open to new editors and members, but those members must learn proper etiquette. I will consider releasing your block, but not yet, maybe in a couple of days. In the meantime, I'd ask you to look at other people's edits and see how they are doing it. --Jeff (talk) 20:02, September 24, 2011 (UTC)
Ya know, I did'nt know that the pages were deleted. I'm sorry. How can I make it up to you guys? Funnyboy2963 20:30, September 24, 2011 (UTC)

As I mentioned earlier, I can lift your block in a couple of days. And as I said, spend some time looking at the edits that are occurring now. You will see some things being rolled backed, so take a look and see why those changes are rolled back. Or look at other changes (like by Felopas) that are not being rolled back. Use that knowledge so when I lift your block you have a better idea of what is and is not appropriate changes. I will tell you know, if I lift your block you will not get another chance. I'd recommend making changes slowly, and check if what you are doing is getting rolled back. If you don't understand why something is undone you need to ask instead of plowing ahead and making similar changes. Thanks. --Jeff (talk) 21:20, September 24, 2011 (UTC)

If you don't know how to do a reference, go look at a page that has references and go into edit mode to see how it was done. I recommend using Source mode rather than Visual mode because you can see exactly what was done. And if you are trying something new, make sure to use Preview mode to see how it's going to look. If you are trying something and can't get it to work, then cancel your change (or if you have already published it, go into history and undo it), then ask one of the sysops how to do it. That way, we know you are making an attempt to learn. --Jeff (talk) 20:25, September 25, 2011 (UTC)

OK, I have lifted your block. As I said earlier, you will not get another chance, next time will be permanent. So I would recommend going slow with changes, maybe try a couple and make sure they are not undone. If you have questions on potential edits feel free to ask me.
And it looks like your badges came back. --Jeff (talk) 12:44, September 27, 2011 (UTC)

Here are some tips for you on your edits today. First, on the Brave Trivia page, you added a line that this may be the 2nd movie with an all human cast. The word may signifies that it is a guess and not a fact. We only want official, factual information. In addition, the page was marked for deletion, so you shouldn't add more information to it until it is resolved whether the page will be deleted or not. This type of edit (an opinion or guess) is something you do often and you must refrain from it.

Hello, since I am not allowed to make a page for this fictional character, I will just explain about her here:

Emma Trunkov is the main antagonist in Cars 3: Part 1.

Why are you adding this category to the TV Series pages? They already have categories like TV Series. These pages are similar to films and short films - we don't add the culture category to those pages. I have rolled back those changes. --Jeff (talk) 15:28, October 10, 2011 (UTC)

I'd like to say that your welcome to User:Westhamwill10 was a very cocky move. Saying that you are an important editor, as well as User:Crazyhead88, is like saying Jeff, Ryan, and the other admins/users are unimportant. Yes you are both important parts of the wiki, because without editors the wiki would be nothing, but you can't just go around telling new users to ask for help from you because you are "important". Plus, User:Westhamwill10 already has a welcome on his talk page (the right one), from Jeff, as a welcome from admins is automatically added to a new user's talk page. --Aaron (chat) 22:20, October 12, 2011 (UTC)

The welcome message that new members receive is system-generated - we do not personally go to every members talk page and add a welcome message. --Jeff (talk) 12:17, October 13, 2011 (UTC)

My son is named Keith and he loves the lemons. He was so happy to see a lemon car named Keith. His twin brother's name is Cooper and they always spot the "Cooper car" when we are out and about. So knowing that there is a "Keith Car" has given us some joy. Can you please give green gremlin his name back to "Keith". Thanks, from a mom of twin 3 year old boys.

I didn't copy your name

Funnyboy2963, I officially declare that I did not, copy your name.

Retrieved from "https://pixar.fandom.com/wiki/User_talk:Funnyboy2963?oldid=68850"
Community content is available under CC-BY-SA unless otherwise noted.