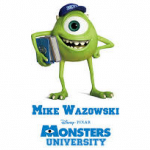 Hi, welcome to Pixar Wiki! Thanks for your edit to the Randall Boggs page.

I saw today that you edited the List of Pixar Villains page. You wrote really good stuff, but the thing is, I don't really think every Monsters University students are villains. Maybe the PNK girls are, since they guided the OK members to the party where they are humilliated. But I don't think the JOX members are villains; or the HSS members either.

But, well, that's my opinion.

Hello. Please stop trying to add "-gonists" to all characters. It is not really possible, many characters are only minor, supporting, characters. Trying to rank them will result in uselessly complex designations. Characters are not as simple as good and evil. There is no real linear ranking of all of them, like there would be in traditional theater.

Also, I attract your attention to this discussion we once had, in which we decided characters that are not evil should not be called villains, like the dentist in Finding Nemo, or Auto in WALL-E.--Gray Catbird (talk) 16:32, July 3, 2013 (UTC)

Which one is he?

You have made a lot of edits this year where you change the antagonist or protagonist level of a character and from what I can tell, that's all you do.

I have looked at the edits you have made to the page for Randall Boggs. Since June, you have edited it 16 times. Of those 16 times, you have said the following:

In Monsters Inc., Randall is the

In Monsters University, Randall is the

When you make these edits, it's apparent that you are trying to hide the fact that you are changing the page back when someone undoes your edit, or you contradict yourself by putting in something different than you did before. You've already been blocked on other wikis for pulling the same kind of stunt. You really need to find better and useful things to add to wikis. Because if you continue making edits like this, you're going to wind up getting blocked on this wiki, too. —RRabbit42 (leave a message) 05:22, December 8, 2013 (UTC)

Which one are they?

You're doing it again. Three days ago, you changed Johnny Worthington III from a main antagonist to a secondary antagonist. Today, you changed it back. Do you even know which one he is, or are you changing it just to change it?

You've also done this with Dean Hardscrabble. According to you, she is:

"Supporting character" and "major character" contradict each other, and you apparently can't make up your mind if she is secondary or tertiary for being an antagonist, as well as whether she is a current antagonist or a former antagonist.

There are similar contradictions and changes by you for Professor Z, Scud, Sally Carrera, Doc Hudson and many others. Based on this, I am going to recommend that you be blocked from this wiki because you are not helping it by constantly changing what you say and fussing with what kind of antagonist a character is when you can't even make up your mind. —RRabbit42 (leave a message) 17:09, December 21, 2013 (UTC)

RRabbit42 is right. You've been asked countless times to stop changing "-gonists" levels, and it is lengthy to revert your edits again and again. You had already been blocked for this behavior. Yet, in spite of all this, you keep doing it. We've already let you way too long without taking action. As such, I will ask you to immediately stop changing -gonist levels, otherwise you will be blocked. Thanks. --Gray Catbird (talk) 18:27, December 21, 2013 (UTC)

Because you have not listened to our previous warnings, I have no choice but to block you again. This block is for 6 months. Hopefully when the block is lifted you will try to be more respectful of our requests and warnings but note that if not the next block will be permanent. --Jeff (talk) 14:41, January 2, 2014 (UTC)

You have been permanently blocked from this wiki. Since your last block was lifted just a couple weeks ago you have continued to make changes that have to be reverted, all regarding the antagonist category. This is what led to you being blocked the 2 other times. I dislike having to do this, but since your behavior hasn't changed and this is your 3rd block, it is now permanent. --Jeff (talk) 18:21, July 30, 2014 (UTC)

Retrieved from "https://pixar.fandom.com/wiki/User_talk:MikeWazowskiROR?oldid=150926"
Community content is available under CC-BY-SA unless otherwise noted.