"I don't need a map! I have the GPS. Never need a map again, thank you."
—Van reminding Minny that they have a GPS, after Sally tells them that she has a map.

Van is a character in Cars and Cars 2.

"Van and his wife Mini love to travel; the problem is they don't know where they're going. The two share a strong sense of adventure but unfortunately a stronger lack of direction, turning most of their relaxing getaways into strenuous marathons over mountainous terrain, through the desert and past every gas station -- as Van would rather stall then ask for directions."[1]

Van is Minny's husband in Cars. He refuses to ask directions, claiming not to need them due to having a GPS. Minny mentions that Van did the same when they were heading up to the "Crazy Days" (a parody of Derby Days) in Shakopee. They both drive through Radiator Springs while Lightning McQueen is fixing the road, looking for an on-ramp leading to Interstate 40. The residents try to get them to buy from their stores, but Van disagrees with them along with Sally saying that she has a map. When they were about to leave, Lizzie puts a sticker on Van's bumper as something to remember the residents, and Sally says to them to tell their friends. After McQueen begs Van and Minny to call for help, they just stand for a few seconds of silence. Then their car alarms go off, and they just leave the town (they dismissed McQueen's plea as madness). In a post-credits scene, they are lost in the middle of the desert still looking for an on-ramp. They are covered in dust and had tumbleweeds stuck to their tires (as well as inside Van's luggage carrier). Minny arguably asks Van if they can ask someone for directions, but Van, almost driven to insanity, still refuses and says that there is an on-ramp close ahead.

Van and Minny reappear near the end of the second film. While Minny is mesmerized by Mater's spy story, Van does not believe one word of it until British agent Holley Shiftwell arrives to confirm it, which surprises Van a lot. When Flo brings attention to a dent on Holley's side, Van, mesmerized by her beauty, asked if she got it when she saved Lightning and Mater from the Lemons, much to Minny's casual annoyance.

Later during the Radiator Springs Grand Prix, he watched the race. When Mater zoomed by him using his rockets, several maps flew out of Van's luggage carrier.

In Spinning, Van makes a cameo in the crowd watching Guido perform his tricks with a sign. 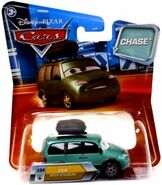