Voyd, also known as Karen Fields, is a wannabe Super and mega-fan of Elastigirl appearing in Incredibles 2. Her power is to create portals that can transport objects and people from one place to another. She was among the Supers who Evelyn Deavor hypnotized using Hypno-goggles.

Voyd was invited by Winston Deavor into a group of wannabe Supers as part of the campaign to restore the legal status of Supers. During a DevTech Party with the other wannabe Supers, she meets her idol Elastigirl. Since she looked up to her for a long time and was such a big fan, she is really nervous and has difficulty containing her excitement. She thanks her for doing what she was doing for her and other Supers, and shows her power by transporting a mug back and forth between her wormholes. Elastigirl says she feels different than the others before, but she was happy about what she was doing to legalize Supers again, and gives her a hug.

Not long after Evelyn reveals how she was the mastermind behind the Screenslaver, she places Voyd and the other wannabe Supers under her control using Hypno-goggles. They are instructed to attack the Parr children after arriving at the Parrs' mansion with the other wannabe Supers. The kids escape in the incredibile and find their way to the Everjust.

Voyd later attacks Violet, who was looking for her parents, and alerted the wannabe Supers by knocking over a pot plant. Not long after the Parr children reached their parents and Frozone and released them from Evelyn's control, the wannabe Supers attack them, and Voyd fights Elastigirl, making wormholes in front of her arms and legs as she tries to punch and kick her to send them backwards, with one of her punches even being sent back making Elastigirl sucker-punch herself. Elastigirl then formulates a counter-tactic and curves her punch after her fist enters the wormhole and takes off her Hypno-goggles. No long under Evelyn's control, Voyd helps Elastigirl find a way into the jet Evelyn was trying to escape on. After Helen catches her while falling with her from the jet, Voyd catches them in a portal and transports them back to the ship.

Near the end of the film, after Evelyn is put into a police car to go to prison, Voyd strikes a conversation with Violet and tells her that she really liked what she did to make the ship turn, and Violet apologizes from her for attacking her on the ship. Voyd is last seen witnessing the re-legalization of Supers along with the other superheroes.

Voyd is a shy, friendly, smart and eager wannabe Super. The banning of superheroes caused her and other Supers to hide their powers and be forced to live like normal citizens. She didn't like being unable to be herself, but when Winston forms a group of Wannabe Supers, she is happy to have the chance to embrace her true self as a superhero.

Voyd is a mega-fan of Elastigirl. She looks up to her and sees her as a mentor, and she was the one woman who made her be grateful for her powers and not think of it as a curse.

Voyd has a slender figure and light tan skin. She has blue eyes, magenta lips and teal blue hair in an asymetrical cut with the longer section covering the left side of her face. Her supersuit is a green and blue leotard with a bluish gray, indigo and lime "V" insigna on the middle and grayish blue tights. She has a dark teal eye mask with matching boots and gloves. 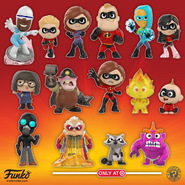 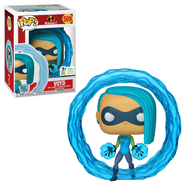 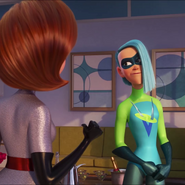 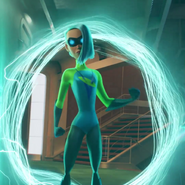