Callum O'Neill[1]
Wee Dingwall is a character in Brave. He is the son of Lord Dingwall, and as such serves as one of the suitors to Princess Merida who compete for her hand in marriage.

Gangly, guileless and often lost in his own head, Wee Dingwall is the awkward son of Lord Dingwall. Though Wee Dingwall displays an eagerness that outweighs his inherited small size, his father will proudly employ his only son as an attack dog when the moment is right.[2]

During his introduction, he stood behind a large, muscular member of Clan Dingwall, and had to be yanked into view by his father. After being mocked by the other lords, Lord Dingwall summoned his son, who attacks and bites Lord Macintosh, starting a generalized fight.

During the archery contest, in spite of his extreme clumsiness, he accidentally achieved a perfect bullseye when King Fergus startled him at just the right moment, becoming therefore the winner of Merida's hand.

Later, during Merida's speech to the Lords about letting their children decide their own fate, Wee Dingwall finally spoke and stated that going after Merida was his decision. He took part in (unwittingly) hunting down Queen Elinor in her bear form, and was present when she returned to human form. At the end of the film, it was shown that he did have some interest in Merida, as he kissed her hand good-bye repeatedly, somewhat to her disgust. He then left the castle with his clan.

It is revealed at the end of the short that the witch was telling the story of Mor'du to Wee Dingwall. She then offered him a spell, but Wee Dingwall, terrified, exclaims he only wanted a drink of water. He tries to flee, but can't get the door to open, until the witch tells him to pull. He thanks her, and runs off screaming. 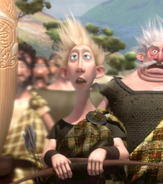