"What's the point in prolonging the inevitable? We're all just one stitch away from here...to there."
—Wheezy points to a yard sale outside Andy's house

Wheezy is a supporting character and a squeaky toy penguin that appears in Toy Story 2.

Andy got Wheezy sometime before the events of Toy Story 2. He was once one of Andy's favorite toys until his squeaker somehow broke, leaving Andy distraught. When his mother said she would fix it (just to console him), she instead left Wheezy on the shelf, where he was forgotten as he got sicker and sicker, while also coughing on the dust. He tried to squeak for help, but nobody could hear him as his squeaker was still broken, plus the dust would exacerbate his sickness further.

When Woody's arm was accidentally torn by Andy, he also ended up on the shelf and by chance, discovered Wheezy. He tried to help Wheezy but there was little he could do to repair him. The asthmatic penguin pointed out that there was a yard sale outside and that he was likely to be sold. He was among the few toys collected for the sale, so Woody rushed to rescue him. He and Andy's dog, Buster, ran out to the sale and recovered Wheezy, who was grateful for his help. Unfortunately, Woody fell off Buster, who ran back inside the house with Wheezy still on him. Woody was subsequently found and kidnapped by Al, and this is where the toys' mission to rescue him began. As Buzz prepared to embark on his mission, Wheezy pleaded with Buzz to save Woody. Buzz promised Wheezy that he would do his absolute best.

Wheezy was later seen in a much happier mood after Woody and his friends return home. Wheezy was finally repaired and his illness was cured with help from Mr. Shark and sang "You've Got a Friend in Me" to all of his friends in a deep jubilent voice.

Wheezy only appeared briefly in the home videos that Andy's mom made of Andy when he was a kid. Later on, Woody commented that Wheezy and toys like him were either given away or sold in yard sales, which suggests that Woody was unable to help him this time like he did before. Wheezy had a silent cameo in the movie, most likely out of respect for his late voice actor, Joe Ranft.

In the show's pilot, Wheezy makes a cameo appearance in the film's opening sequence where Joe Ranft reprises his role. Wheezy sees the Buzz Lightyear VHS after it arrives in Andy's room and tells Buzz, "You ought to sign that tape there. It might be worth something someday!" Later, in the TV series, Wheezy makes a cameo at the intros of the animated series where he is trapped in a box house on fire. Suddenly, Buzz flies by and rescues him. Buzz then goes to watch his TV show with the others.

Wheezy appears in Toy Story 3: The Video Game, along with Bo Peep. Due to the deceased Joe Ranft, Wheezy is voiced by a new video game voice actor, Phil LaMarr.

Wheezy and Bullseye putting blocks together to say "Happy Holidays"

(Woody: "What are you doing up here, I thought Mom took you to get your squeaker fixed months ago, Andy was so upset.") "Nah, she just told him that to calm him down, and then, put me on the shelf."

"What's the point in prolonging the inevitable, we're all just one stitch away from here, to there."

"You just gotta save my pal, Woody." 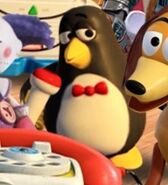 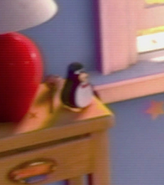 Woody: "Wheezy? Is that you?"
Wheezy: "Hey, Woody."
Woody: "What are you doing up here? I thought Mom took you to get your squeaker fixed months ago. Andy was so upset."
Wheezy: "Nah. She just told him that to calm him down, and then... put me on the shelf."
Woody: "Well, why didn't you yell for help?"
Wheezy: "Well I tried squeakin', but I'm still broken. No one could hear me. (tries squeaking, but coughs instead) Besides... (gasps) ...the dust aggravates my condition."


—Woody meets a broken Wheezy on a shelf

Woody: "Wheezy, you're fixed!"
Wheezy: "Oh, yeah. Mr. Shark looked in the toy box and found me an extra squeaker."
Woody: "And how do you feel?"
Wheezy: "Oh, I feel swell. In fact, I think I feel a song coming on!"
—Woody and a fixed Wheezy