Cars
Tokyo Mater
Wingo is a character in Cars. He is a member of the Tuner Cars.

Wingo in Cars 2: The Video Game. 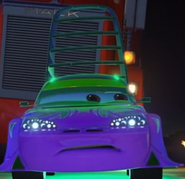 Wingo showing himself his interior lights beside Mack

Wingo with his shades on 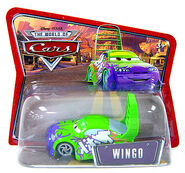 Retrieved from "https://pixar.fandom.com/wiki/Wingo?oldid=206464"
Community content is available under CC-BY-SA unless otherwise noted.