Woody Car: "YOU ARE A TOY CAR!"
Buzz Lightyear Car: "You are a sad strange little wagon and you have my pity. Farewell."
Woody Car: "Oh, yeah? Well, good riddance, you loony!"
—Woody Car and Buzz Light Car arguing

"Woody may have been pushing the miles and a little over his warranty, but he was still the favorite in Andy's garage until one day the new model rolled off the assembly line, a high tech, low I.Q. oil slick named Buzz Light Car. Suddenly, Buzz has a prime parking spot in Andy's garage, and Woody's parked on the street."[1]

Woody is a woodie wagon, a verbal and visual pun on Woody. He appears in Toy Car Story. 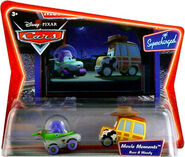 Retrieved from "https://pixar.fandom.com/wiki/Woody_(Cars)?oldid=197766"
Community content is available under CC-BY-SA unless otherwise noted.