Toy Story 2
Zurg's Robots are the weapon-equipped robots that are seen in the Buzz Lightyear: Attack on Zurg video game at the beginning of Toy Story 2 after Buzz Lightyear lands on Zurg's planet. Buzz destroys them by shooting a giant crystal with his laser, and sending hundreds of lasers through the robots. There is also one robot that comes out of the wall as a camera, and spots Buzz before getting its eye blown off. They appear in Toy Story 3: The Video Game as they try to attack Buzz again.

Zurg Bots as seen in Toy Story 3: The Video Game 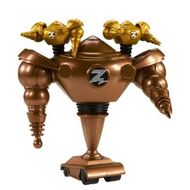 A Zurgbot figure featured with Toy Story Space Mission: To Infinity and Beyond Packets.
Add a photo to this gallery
Retrieved from "https://pixar.fandom.com/wiki/Zurg%27s_Robots?oldid=163592"
Community content is available under CC-BY-SA unless otherwise noted.